I had my final ultrasound appointment yesterday morning. Adam was able to come with before he headed to work as my appointment was at 8:00am. Ultrasound revealed that I had a single follicle. At my earlier monitoring ultrasound I was showing three growing follicles but as always, one became dominant and the rest fall off. The follicle this round was on my right ovary. This is rare as my right ovary has only produced one one other time in this two year journey. I know this means there is a chance, but I will admit I am disappointed that I don’t have three as was showing earlier.

After my appointment Adam and I head in opposite directions and work through the day. I stay pretty distracted focusing on planning a lock-in and finishing up at the office. As 5:30 rolls around I head home to meet Adam: It’s Trigger Shot Time.  A trigger shot is a pre-filled syringe that contains a synthetic form of the hormone: human chorionic gonadotropin (hCG).  HCG helps in the follicle maturation process and triggers the release of mature eggs from the follicles.  The hCG trigger shot assists in the final maturation process and ensures that the mature eggs are released from my follicles.  There are several brand names for the hCG trigger shot, but the one I have is called Ovidrel. After it is administered I will ovulate within 12-36 hours. In a normal, non-medicated cycle a different hormone, the Luteinizing hormone (LH) peaks to signal release of the egg from the follicle.  In my case the HCG trigger shot mimics the hormone LH to induce ovulation. 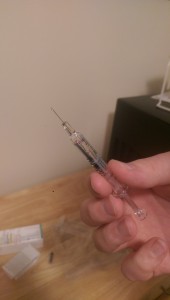 The trigger shot must be administered between 6pm-8pm to ensure that I fall within the 36 hour window prior to our IUI. Since I had to rush off to Women’s Bible Study by 6:30pm we prepped for injection at 6:15pm. The shot is for the most part painless. I am not afraid of needles by any means (blood work and injections), it has become routine. I am, however, not able to administer it myself as I cannot willingly inflict pain (even though it’s very slight) upon myself. The injection responsibility for the trigger shot falls on my husband. I am lucky that he isn’t afraid of needles either. About a half hour prior to injection we remove the syringe from our refrigerator. This is so the cold doesn’t shock my stomach and helps alleviate some of the discomfort. 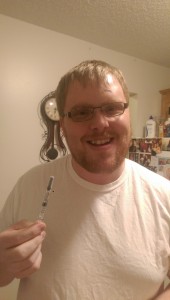 HCG is also the hormone used to track pregnancy and what over-the-counter pregnancy tests look for to test positive. One cool trick is after I have been injected I will test positive on a home pregnancy test for up to ten days. This of course is not due to pregnancy but rather from the HCG pulsing through my body. Call me weird but for our last IUI and trigger shot I did grab one of our remaining pregnancy tests from dollar tree and watch the lines appear. I know it’s not real but it is fun for me to see, and imagine what it’d be like to have a real positive test.

The injection process only takes a few seconds. It’s mostly painless with only mild burning and tingling.  Adam completes the injection and disposes of the syringe in our sharps container. Three syringes now fill our box. Three times we have tried and this makes our last. I put myself back together and fix my shirt. Adam gives me a kiss goodbye and I head out the door to Bible Study. Life doesn’t stop for infertility.