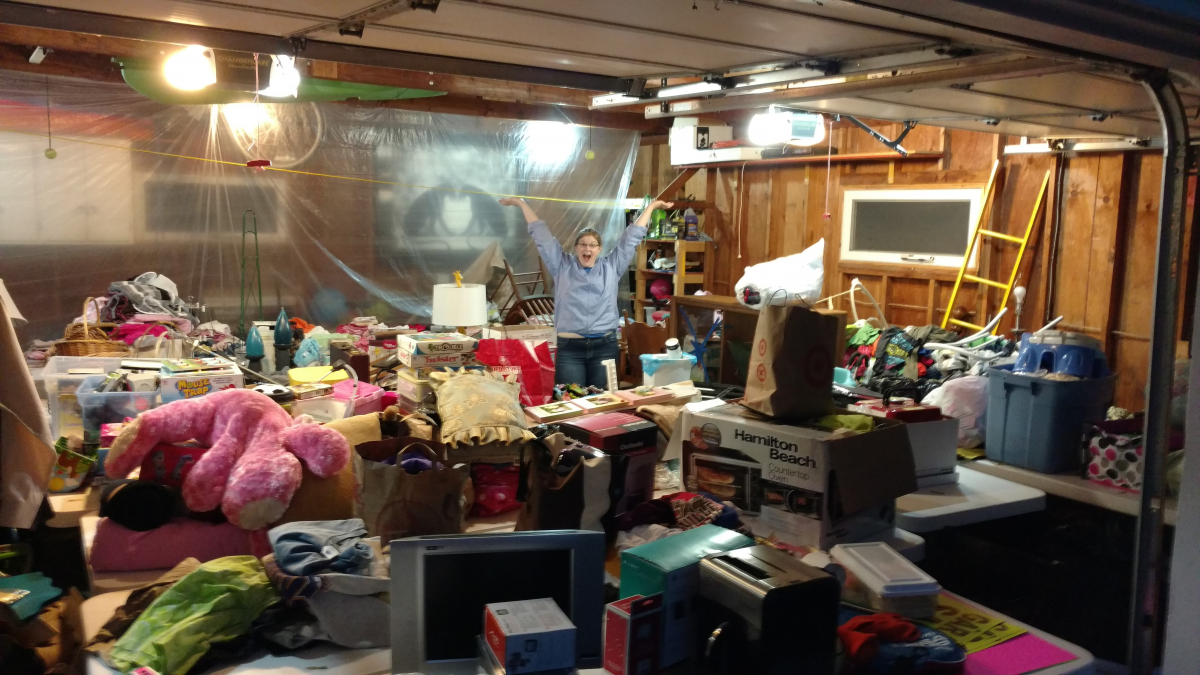 It has been a long and great past few days. This past week was our adoption garage sale fundraiser. The garage sale itself was not at our home but at our church friends’ Dave and Kelsey’s house. Their property is situated on a busier street and has three stalls which made it ideal. They literally opened their home and garage to us for and we are SO thankful for them!

Adam and I began sorting items the Saturday before the sale. The sale was planned to go Thursday, Friday and Saturday so we wanted to get a head start. On the Saturday before we were blessed unexpectedly as Kelsey’s mom, Deb, was visiting happened to have a trailer. She graciously allowed us to use it to retrieve a couple remaining loads of stuff to bring back to the sale site. We worked until 10:30pm sorting and putting everything back in the garage. After a couple days (Monday & Tuesday) of working at our respective jobs we both had the rest of the week “off” to prepare and run the sale.

On Wednesday we were so grateful to have many friends from church help out at various times throughout the day. Adam and I arrived by 7:30am or so to get started and once we started pulling things from the garage passers-by would stop and ask to buy stuff. Items were not organized in any way, shape or form, nor were they priced. Initially we turned them away and asked them to return the following day when the sale was actually started…after twenty or more people stopped to all ask about items we gave in and decided it was better to get rid of stuff  so as not to have to deal with it the following day.

Wednesday was amazing with an army of workers. My mom was there as she took the week “off” to work her heart out in helping organize and man the sale. Adam’s mom stopped by to help and also drop off baked goods to be sold at the sale. Several of our dear retired friends including Dean and Bea from church as well as Shirley stopped by. These folks are like grandparents to Adam and I and are so sweet. Dean reminds me so much of my grandpa Pfeil in how he used to “tinker” and “puts around”. He happily folded and sorted kids clothes along with his wife Bea and other church friend Shirley as they worked diligently to get them all ready. 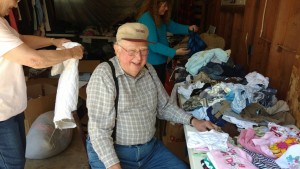 As the day went on we were relieved when the afternoon rush of friends got off work and stopped by. Since it was Adam’s birthday Kelsey and Dave had offered to serve pizza and ice cream for all the workers. Our other friends Nate and Megan along with their two kids showed up with not one but two pick-up and trailer loads and a case of beer!!! Happy birthday to Adam 🙂 Nate assisted with moving the larger furniture items while Megan offered her time to help price, sort and creatively display baby and kids items. Our other friends Brian, Lindsey, helped price and sort along with another friend Katie. Brain was the organizational mastermind on all things in the driveway. He and Katie worked to make sure all kitchen stuff was in one area, all electronics another, and so on. I also want to point out that without the use of Brian’s truck (on numerous occasions) we would not have been able to pull the sale off. Despite it being stressful it was fun to see so many friends, and their kids running around and rallying to support us. 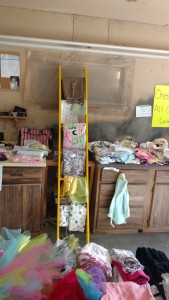 Check out that display: Thanks Megan! 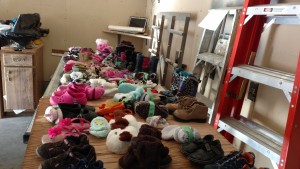 Adam and I left the sale site late Wednesday. We had so many items we couldn’t fit all the tables and stuff back in the three stall garage. The tables that we did put inside were so many and positioned so carefully that I couldn’t even get out without crawling under to escape. With so many items not inside We contemplated sleeping in a tent for fear of theft but instead parked a couple vehicles in front of the driveway and prayed God would protect the stuff. We got maybe 4 hours of sleep since we left late and awoke before the sun and were very happy to see that everything was still there from overnight. 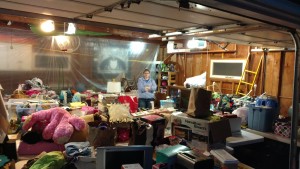 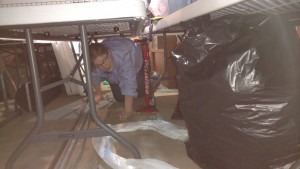