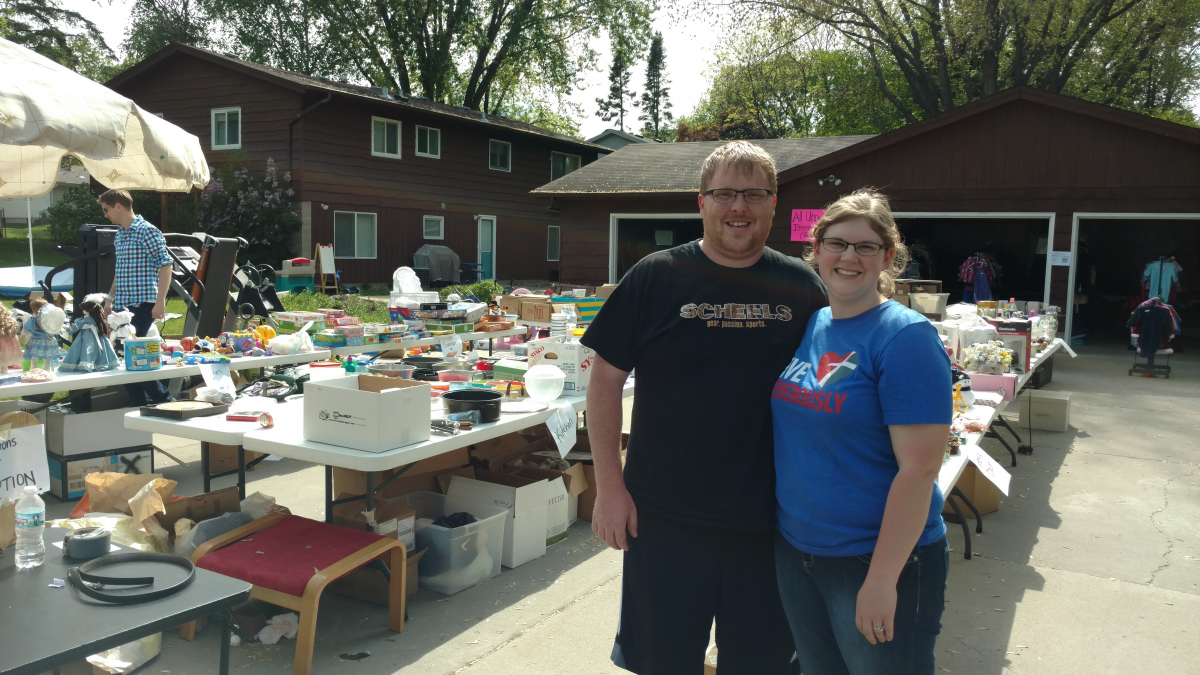 Adam and I were exhausted from sorting the day(s) before but our excitement and anticipation for the sale to start left us both with racing minds. After maybe 4 hours of sleep we awoke before the sun with a 4:00am alarm. We jumped out of bed and headed to pull stuff out of the garage. My mom had spent the night at our place and she too awoke early to help us get ready for opening day.

By 6:15am we were pretty well ready and the avid garage salers were already chomping at the bit to look at our stuff as they were parked and ready for their day. This particular weekend was the city wide garage sale so we were not alone in having a sale. The day was filled with a steady flow of people. By afternoon we were flooded with so many visitors as word of mouth had spread. Our post on nextdoor had become the top rated topic, and several ladies mentioned that they came because their co-worker/friend/sister etc. had told them too. One guy at checkout mentioned how “people were talking” as everyone was out and about for city wide garage sale and that we had made a name for ourselves as “that HUGE adoption sale”.

Arial view thanks to Dave’s Drone

On Friday my brother, Amery and his wife Samantha along with their two kids came to help. My brother had taken the entire day off work and Samantha, not only made food for Friday but Saturday as well in order to feed the masses of the sale crew and take down workers. I was glad that they were there on Friday because I was plagued with an unexpected migraine (likely due to lack of sleep, and too much sun) that left me unable to do much for most of the morning. In the evening our friend Sara stopped by to assist with packing up for the evening. We were exhausted so her assistance and companionship was greatly welcomed.

That night my youngest sister, Kayli, and her friend Rachael arrived to spend the night. We had run out of places to put people for sleeping at our place so they set up a cozy little bedroom in our kitchen. Saturday was a little less busy and more manageable pace. We ended the sale with “bag day” from 11am-1pm where everything you could fit in a bag was $2. 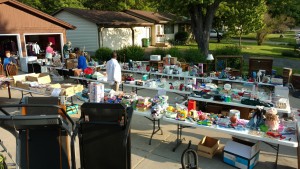 As the sale came to a close several helpers arrived with truck and trailers. Once again Kelsey’s mom offered her trailer which was a HUGE blessing. Dave pitched in to help with clean up despite the fact that he and his wife has already done so much for us. My brother brought his pick-up and we were able to load up the tables and return them safely, while Samantha fed the helpers with some amazing pulled pork. Dean had his pick-up and was able to take two loads away. All the left over items were sent to one of several second hand stores including Goodwill, Savers and the Salvation Army or boxed up to be sold on the church garage sale that will take place this fall.

We hauled away the last of the items, swept and left the garages empty but our hearts filled with gratitude. With the help of so many in volunteer labor, donated sale items, borrowing of vehicles, and publicity we were able to raise a over $3500 for Baby B. Adam and I could not be more pleased. I don’t know how we can ever repay the numerous people who helped make this a success. Adam and I are so humbled and have talked about how we can pay it forward as so many have done for us. It literally brings me to tears at the love that has been poured over us through friends who didn’t have to help but CHOSE to do so. The hundreds of visitors and the stories from people who have been touched by adoption and urged us to press on leave us without words to describe the impact on our lies. We got way more than a garage sale from this whole experience and for that we are so appreciative. 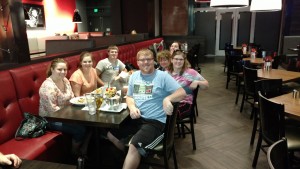